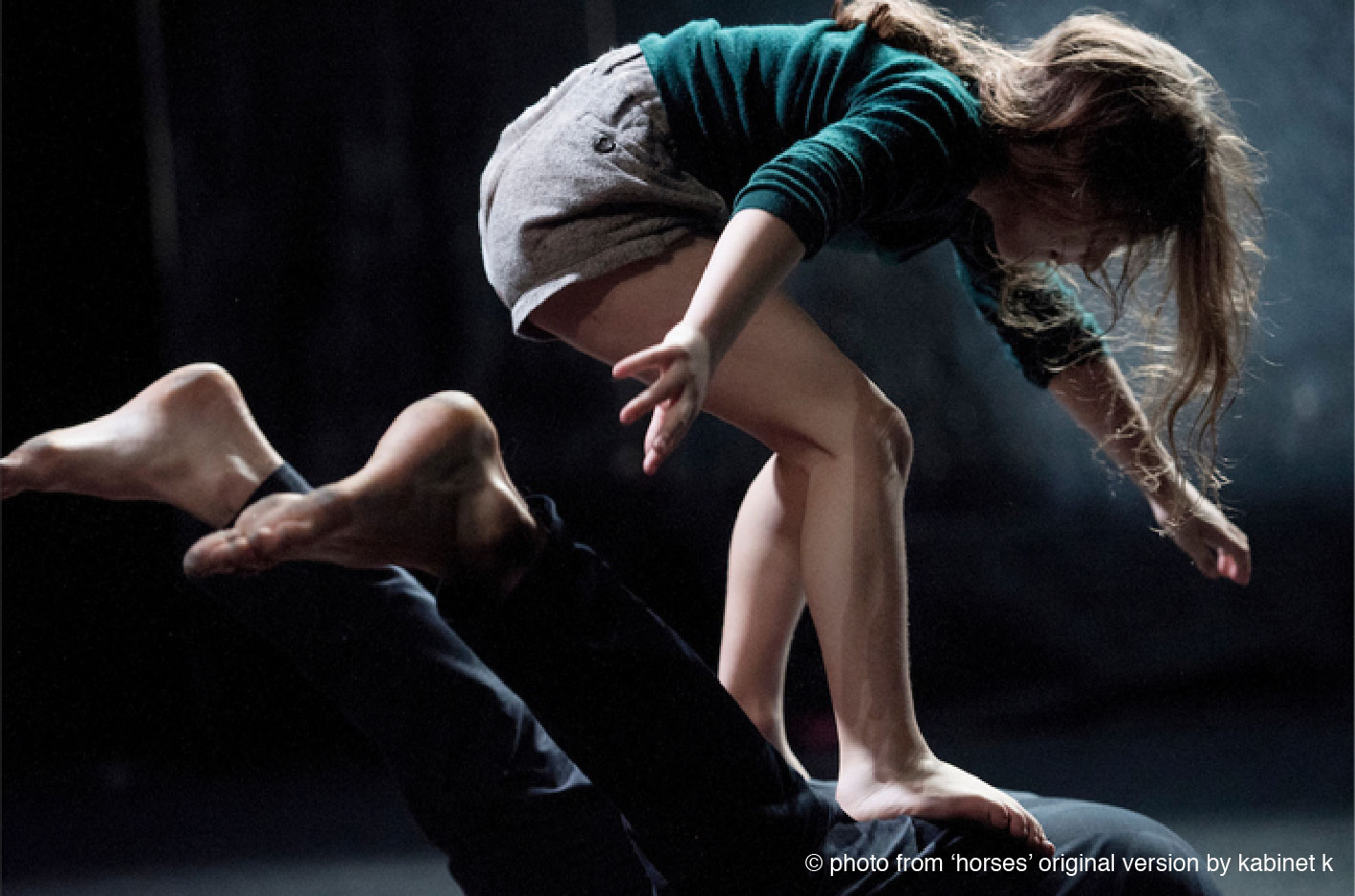 kabinet k is a Belgian company that places children right at the centre of its powerful, high-energy dance performances, looking unflinchingly at the world through a child’s eyes, and harnessing the performers’ naturalism and instinctive charisma. The work connects equally with children and adults, bringing together untrained and professional dancers.

Since 2002, kabinet k uses a choreographic language which is contemplative, minimalistic and visual, but then tilts to a raw, brutal and exuberant energy. Live or newly composed music, the presence of different generations on stage and the influence of visual arts are constant elements in the body of work.

Kabinet k approaches dance in an organic manner, in which not virtuosity but a certain authenticity in movement are predominant. The poetry of the work is universal.

Defracto is a performing arts company whose ambition is to develop a language using juggling and the body. Our practice of juggling is graphic and rhythmic. We seek to create visual impressions, abstract patterns of dots and lines, with moving objects. Our work is primarily concerned with composition in space and time, creating an abstract, moving image on stage. 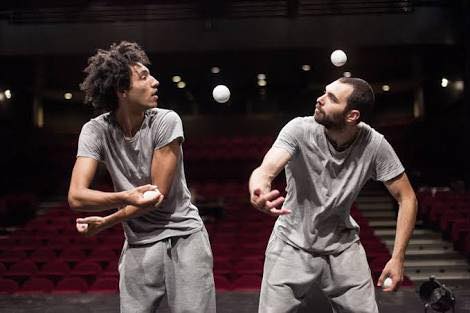 Noémi Boutin & Jörg Müller – France
Noémi Boutin went to Paris’s CNSM at the age of 14 and developed with her cello virtuoso and sensitive language. She revealed her vocation of chamber music with the Trio Boutin, then with the Trio Ceres. Today, she is a singular artist, doing at once a soloist career and original and eclectic artistic adventures, working with Fantazio, Benjamin Colin, Pierre Meunier, Mathurin Bolze. Her engagement to contemporary music drove her to work with composers of different musical words; François Sarhan, Marc Ducret, Eve Risser, Joelle Leandre, Frédéric Pattar, Frédéric Aurier, Jean-François Vrod, Sylvain Lemêtre, Albert Marcœur. With the flutist Sylvaine Hélary, she created in 2013 the duo Myssil then in 2014 the show for young audience “Entre chou et loup”, warmly recognized by the press and the audience. The same year, she presented Sarabande, with Jörg Müller.

Jörg Müller graduated from the National Centre of Circus Arts from Chalons -en – Champagne in 1994. In 1993, he created “Les tubes” with Mads Rosenbeck, then the next year, he works around sound and hanging tubes. In 2001 he signed “c / o”, a performance in a tube filled with water. Since 2005, he has worked on the theme of balance. Jörg Müller performs mostly usual juggling figures (stunt, showers…) but the horizontal movement of objects, which is on the rise, triggers a unique link between the Juggler and the objects.

Alfredo Zinola is an Italian performer, choreographer and dancer based in Germany. His dance studies began in 2004 in Italy with Raffaella Giordano (Ass. Sosta Palmizi) to continue in 2006 the Modern Dance Study Program at the Folkwang University in Germany. At the University of Turin, Faculty of Literature and Philosophy, he graduated in Intercultural Communication.

Felipe González starts in Santiago de Chile studying dance and collaborating with other independent artists until 2008 whenhe travels to Germany to continue his career as an artist. He studied at the University of Chile, received a Bachelor of Arts and Dancer. His background also includes a period of deepening in the National Ballet of Cuba. In Germany he continues to explore contemporary dance training entering from 2008 to 2011 at the Folkwang Universität der Künste in Essen.

After few researches on the form of duet during the study period, in 2013 with Felipe González, they attempted to redefine what could be considered contemporary dance performance for children by creating ‘PRIMO’. 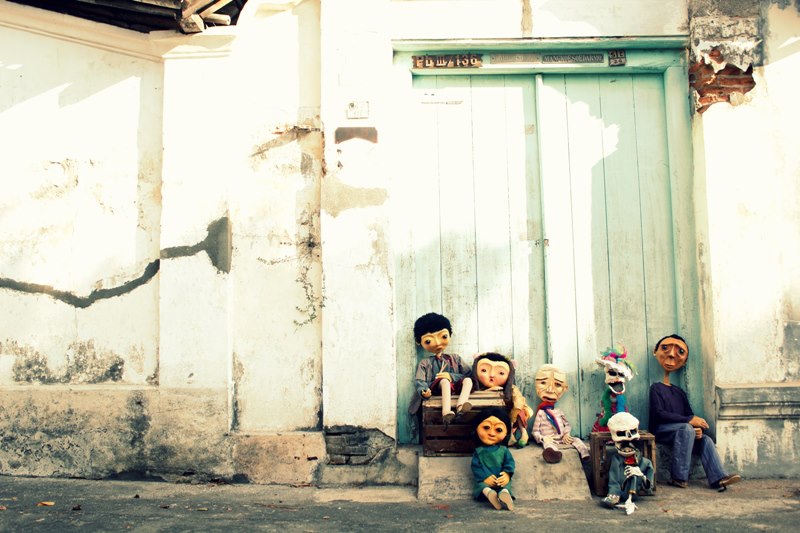 Papermoon Puppet Theatre, formed in 2006 by Maria Tri Sulistyani and Iwan Effendi in Yogyakarta, is a contemporary puppet theater from Indonesia.

The company experiments on art making by using puppet theater as its media. Creating not only performances in theater spaces, Papermoon Puppet Theatre also does site- specific performances, makes lots of workshops for all ages, and opens artist residency for collaborative works. Their performances and artworks have been going to different countries, such as the US, the Netherlands, Japan, Australia, and India. Some of their works include Dia dan Rahasia-Rahasia dalam Hidupnya (2014), Laki-Laki Laut (2013), Secangkir Kopi dari Playa (2011) and Mwathirika (2010). This is the second time of Papermoon in BICT Fest since the first time in 2016.

After more than 10 years of dance careers, MASA and hitoshi have been together working as a team since 2007.
GABEZ combines dance, acrobatics, and non-verbal play as “Dance and Silent Comedy,” and performs on the stages.

Both on the street and in the theater, GABEZ’s pantomime-based non-verbal performance is getting everyone’s favor, regardless of age or nationality. The two-man unit has been receiving rapid growth of popularity not only in Japan, but also from around the world.
In 2014, MASA and hitoshi joined “THE GAMARJOBAT COMPANY,” where they create and perform pantomime-based comedy works. 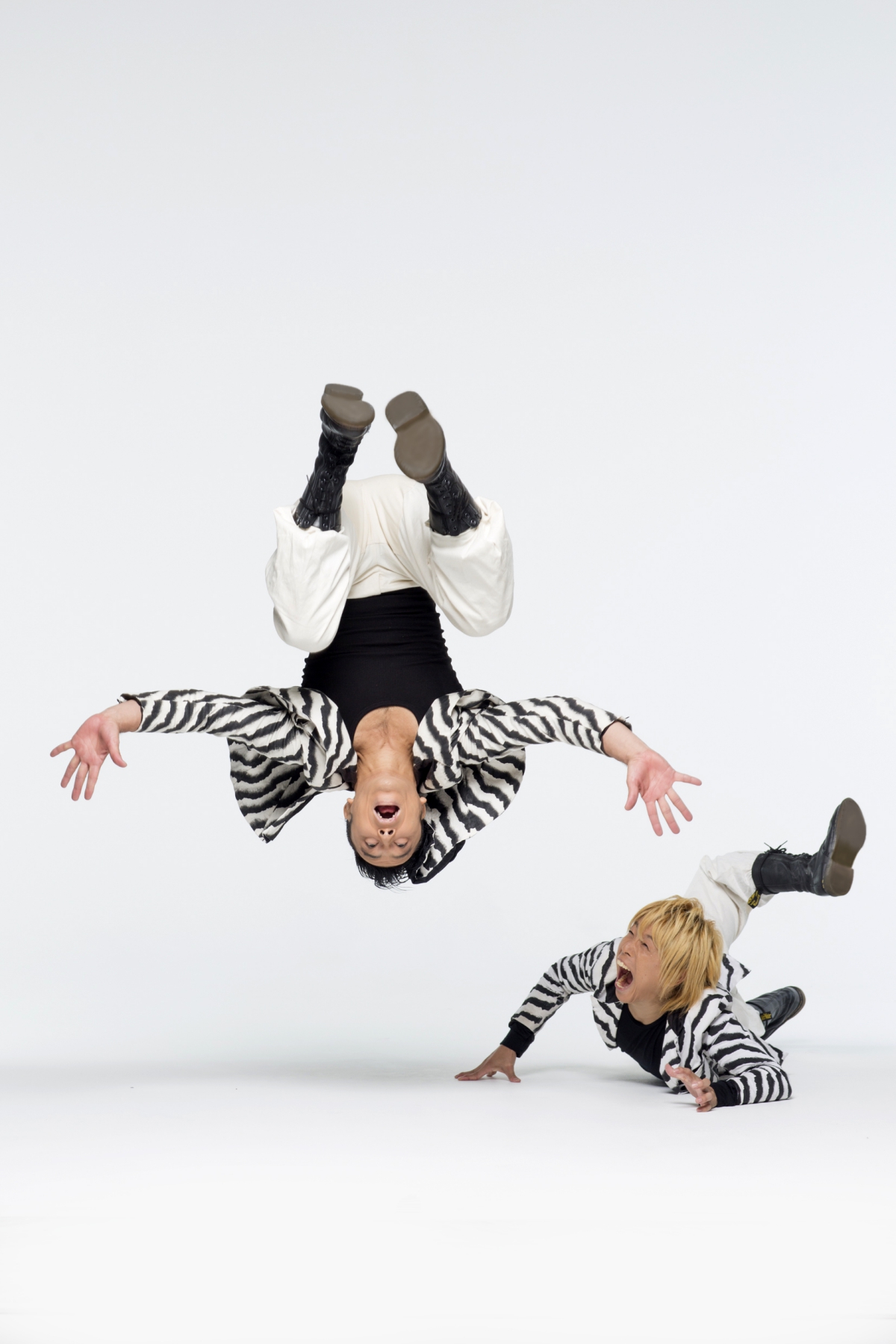 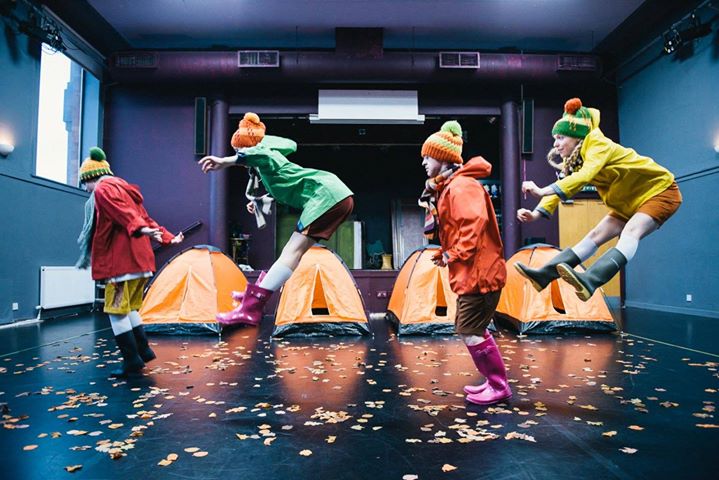 Indepen-dance is an award winning inclusive dance company for disabled and non-disabled people to enjoy, express, and fulfil their potential through dance. Their mission is to enable participation in high quality arts provision and improve wellbeing, quality of life and provide opportunities for disabled and non-disabled dancers in both the professional and non-professional dance sectors.

Indepen-dance works to promote a diverse and inclusive society, which is not only enriching but is the foundation of a more sustainable future for everyone, in the dance field and beyond.

Indepen-dance 4 is Indepen-dance’s flagship inclusive dance ensemble among other 2 groups of the company: Adult Performance Company; and, Young 1’z, with a fast-growing reputation for innovative and high-quality touring productions. Our four dancers [Hayley Earlam, Emma Smith, Neil Price and
Adam Sloan] have worked with an amazing range of choreographers and musicians, touring shows in the UK and across Europe.

BABYMIME was founded by three fun-loving pantomime artists: RATCHAI RUJIWIPATNA, NUTTAPOL KUMMATA, and TEERAPAP PORNPRADIT, who have turned silence into happiness and laughter for 12 years. Childlike imagination that invite audience to become children again is the major driving force of their work. They are a symbol of fun, simplicity, and audience participation.

Today, BABYMIME is Thailand’s number one pantomime troupe who is actively touring in Asia as well as Europe. 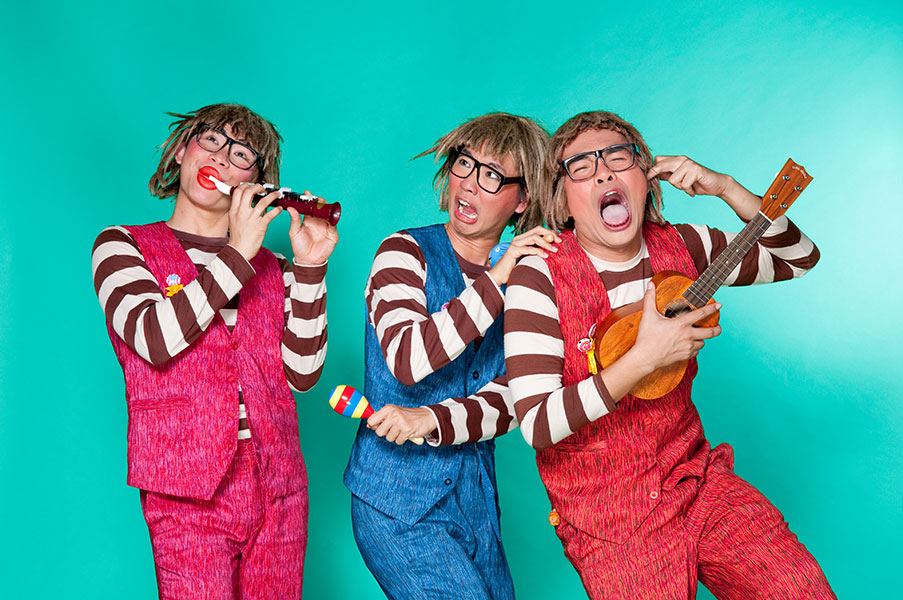 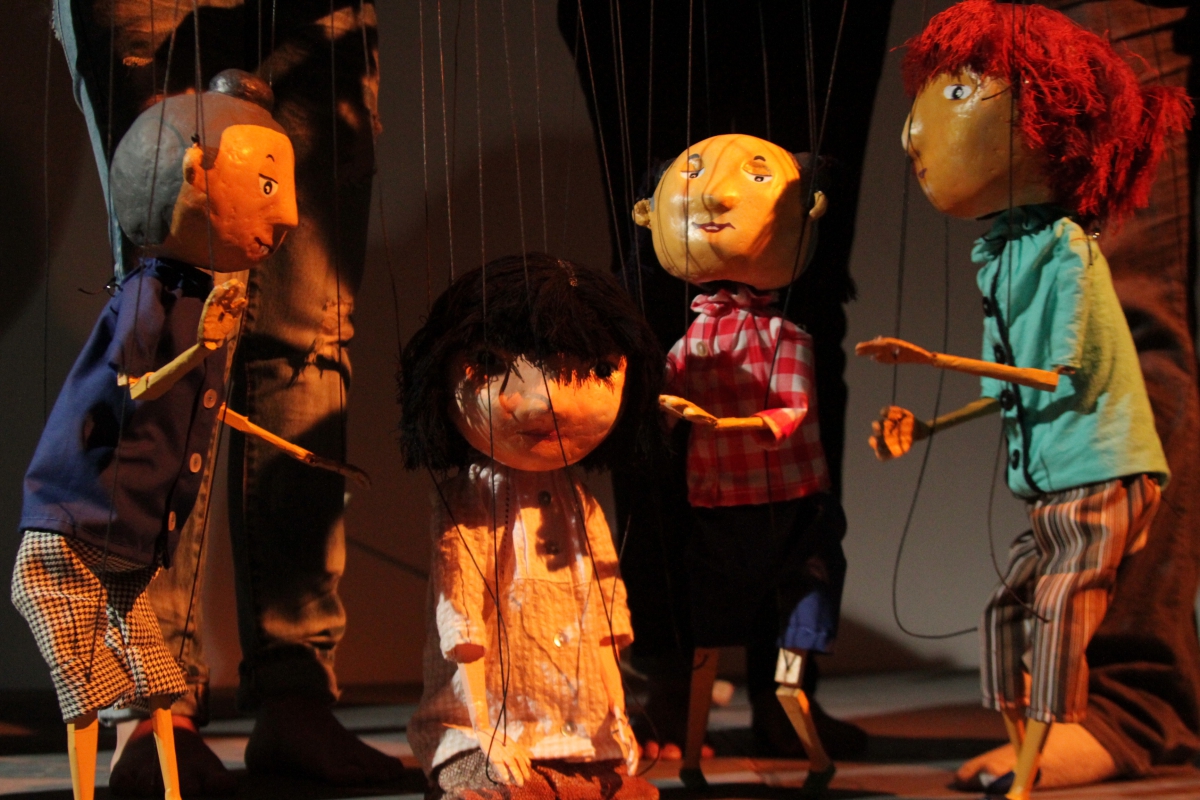 Crescent Moon Theatre is a contemporary theatre founded in 1975. We focus on creating theatre performances as a way of communication, with an aim to link people with theatre and arts. We are the connection and platform for exchanging arts experiences, knowledge, discovering, and experimenting in the field of contemporary theatre. We do theatre, create performance, puppet ; “Grandma Puppet Theatre”, workshops, and art activities.